Sometimes I Write Jokes I Hate

Oftentimes I’ll spend hours working on a joke or a comic to get the timing and phrasing perfect. All that work for the joke to be hilarious to me. And only me.

Side note: I don’t laugh at my own jokes and I get little pleasure out of hearing people laugh at my jokes, but what I love more that anything is when I make a joke, in person, and I get a non-laugh reaction. A reaction that is involuntary and honest, like a laugh but not a laugh. Like a wide-eyed silence or a vocalized exhale or an OMG jaw-drop

When I try my jokes out on my cat 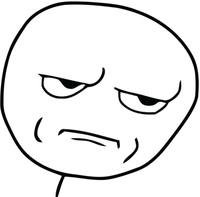 Maybe it’s why I was called the “World’s Stand-Up Comic”  a few years back.

Anyway, back to the point. When I spend time and energy working on a joke, it’s only funny to me. But when I write a joke I don’t like—a joke I consider “too easy” or topical, I tend to not publish them because it “doesn’t fit IDK” or because I fear the joke has been done before (because if I came up with it so easily, I’m sure it’s been done 1000 times) and someone will call foul play (even though nothing is truly original anymore).

Sometimes though, I say, “eh fuck it” and post it anyway. Those tend to be the jokes or comics people like the most. The ones I hate, most people like. What does that say about me and my sense of humor? Or about what I think about other people’s sense of humor? What does that say about my willingness to compromise my writing? Do I compromise and pitch to the lowest common denominator? Or do I keep writing whatever the hell I want?

“An artist who deceives himself is a fraud and a whore”

–My Name is Asher Lev

Would I be deceiving myself by writing things I don’t enjoy to get an audience? I could fill pages of cheap jokes, video game references, and big-titted woman no problem. But that would make me a whore. On the other hand, at what point am I just writing for myself?

I’ve also heard the idea of “build it and they will come” when it comes to writing. If you build work that you personally enjoy, the people who also enjoy that work will find you. Yeah, that’s doesn’t seem to totally be the case with IDK. Unless only 50 people like the same stuff as me. Where’s the balance between artistic integrity and mass appeal? Too far one direction and there is no art. Too far the other way and there is no audience.

What’s art without an audience?

And with that said, I’ve just reached my pretentiousness limit for the day.