Hello and welcome back to the weekly IDK Blog! Today I am talking about some of the relatively poor financial decisions I’ve made in my life! And no, I’m not talking about my purchase of a $30 Chrome Marshmallow shooter. 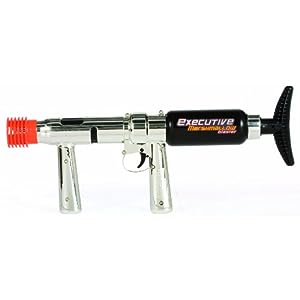 Executive, which means I shoot marshmallows like a boss! Literally.

As you know (because I never stop mentioning it) I gave up a full scholarship for Computer Science at a university (4-year) and instead went a community college (2-year) for theatre. I made that choice because of this idea I heard in high school:

“I wish not to make a good living, but a good life”

That means that I am choosing not to “work hard for the money” but instead to “work hard for the happiness”. Some would say that there is no difference because money is freedom and freedom is happiness. While I fight against the idea of money leading to happiness, there is no escaping the fact that money, at least some money, is required for survival. In order to survive, I tried several different strategies to make money. So far I have (in no particular order):

Yeah, I’ll teach for food, but I’ll give hand jobs for cash

Obviously the amount of money made and time worked varies drastically. While I have not made a whole lot of money from this lifestyle, I have rarely had to sacrifice doing something I enjoy to do something I hate because I need the money. Oh, and at the time of writing this, I have no debt of any kind. Not to a person or institution. I even managed to pay for my own college with these strange jobs!

Now, this next idea I’ve heard has also affected me, but in a different way than maybe it was intended.

So this quote is usually referenced when it comes to business and hard work. The idea is to put a lot of energy and dedication into something so that it will pay off later. Delayed gratification of some kind, like retirement or investing. It is hard to imagine when I live in a society/culture of instant rewards and immediate results.

I’ve known people who have had just one job their entire life. So am I doing it incorrectly? Or am I living a life that most people won’t by jumping from job to job so that I can live the artist’s life most can’t?

Either way, this one is a dangerous and uncertain life. But who wants a safe and certain life anyway?